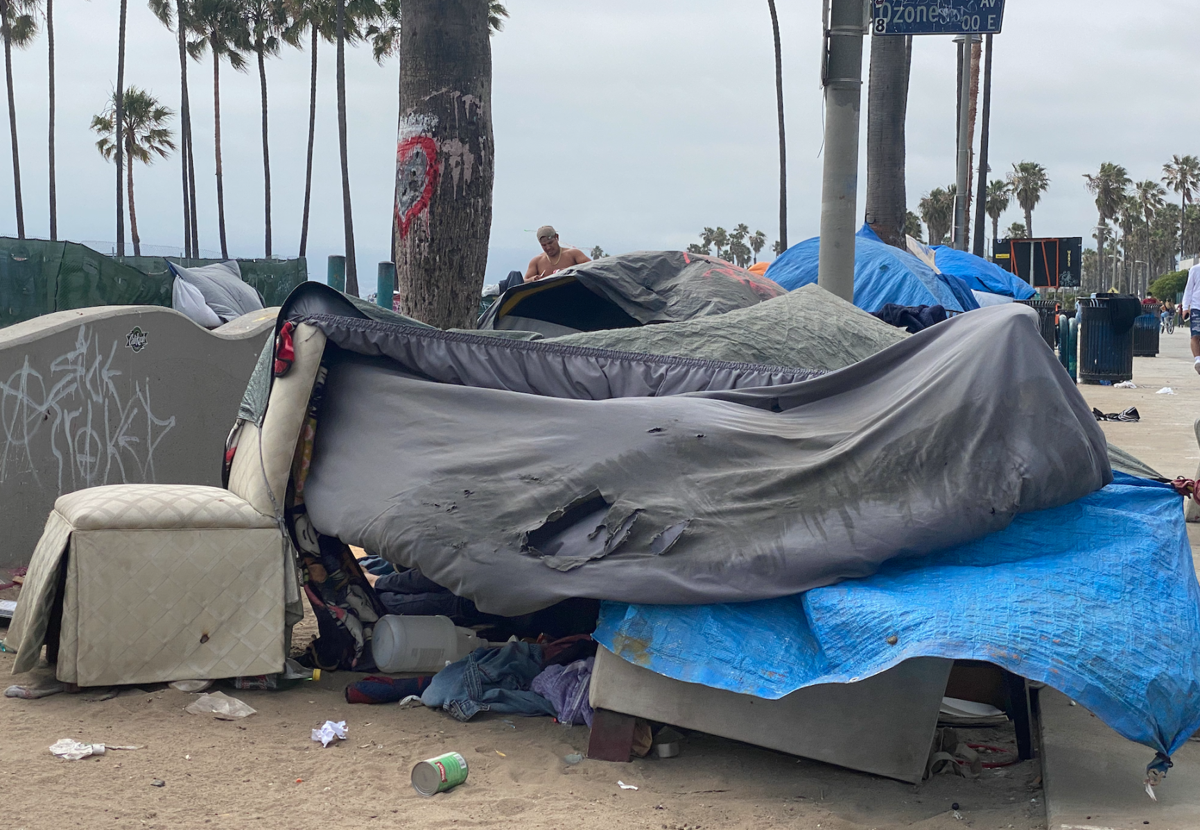 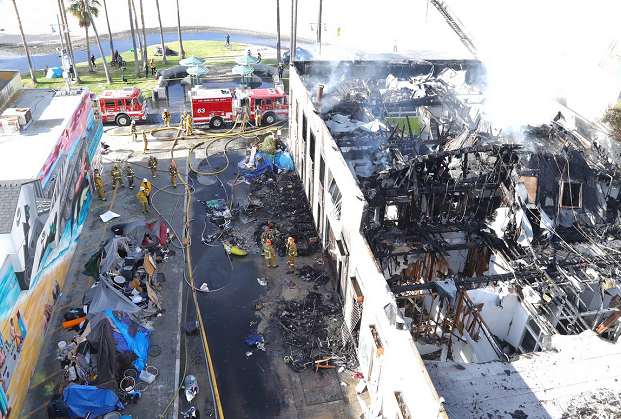 Once the envy of so many tourist destinations, Venice Beach is now a crippled, crime-infested venue incapacitated by high crime, drugs and hundreds of new encampments being enabled by city officials who seemingly have no problem with its current state and condition.

While homelessness always existed at the boardwalk, the current situation is so dangerous and out of control one wonders if an economic comeback is even possible.

For under Garcetti and Bonin, Venice Beach is now a slum by the sea!

For the policies of LA Mayor Eric Garcetti and CD-11 Councilman Mike Bonin have promoted the current crime wave run amok, as they refuse to do anything to clean, sanitize or bring the boardwalk back to its former eclectic and diverse glory.

For gone are the entertainers, chain saw jugglers and Venice regulars, and have been replaced with hundreds of tents and encampments so dangerous that an entire office structure burned to the ground because of hapless enforcement of any sense of normalcy at the beach.

For right is now wrong, and wrong is now right.

For the patients have indeed taken over the asylum, the only question is whether it can be taken back and revived for what it once represented.

For dozens and dozens of stores have closed and remain shuttered as some of the restaurants and retailers try to remain open during the day to snatch back some customers and sales.

But once the sun goes down, the Venice Boardwalk is not only closed for business, but a crime scene in the works!

For the many eateries that populated the boardwalk are gone.

Not even the world famous “Ben & Jerry’s” can make a go at it as they have announced they too may be leaving and the reason for that departure is the homeless disaster that goes ignored and unacknowledged by the likes of Garcetti and Bonin!

With COVID-19 decimating the commercial real estate climate in and around the boardwalk, this homeless epidemic within this sustaining pandemic leaves little confidence that anything can be done to turn the corner and bring back the tourists and make the Venice Boardwalk functional once again!

For how many more retailers need to close, how many more public structures like the hand ball courts are allowed to be held hostage by criminal transients and why does it take years to refurbish the weight pit, now closed for two consecutive summers looking for a third?

Given the current conditions, why would anyone visit the Venice Boardwalk?

As a member of the Oceanfront Walk Committee of the Venice Neighborhood Council (www.venicenc.org), I am frustrated by the lack of action that actually addresses the central issue of homelessness at the beach. For why are these transients for the most part enabled not only to live at the beach, but to disrupt the ability of these struggling local businesses to make an honest living?

For shooting up, drinking, accosting tourists and destroying the very fabric of what was a great place to visit is now a moral dilemma that must be corrected before this new normal at Venice Beach becomes this new crime-ridden legacy!

Even the world famous vendors of Venice are now a small handful, unable to set up booths and tables when inundated by those who now own the streets and the beach with the proliferation of tents everywhere and why is this even tolerated?

For why are the homeless enabled and allowed to break the law?

And what complicates this depressing situation is the fact LAPD is suffering monstrous budget cuts and being instructed not to engage the homeless by LA city officials.

For the hard reality is that there is no path or direction to clean-up the boardwalk under Garcetti or Bonin. And what will it take to revive the tourist destination that attracted some 13 million visitor’s pre-COVID-19!

For the only real question that remains is how bad will things be allowed to spiral downward until Garcetti and Bonin actually visit the boardwalk and see for themselves how things have gotten on their collective watches?

If they forgot where we are, just point due west!

Homelessness at the beach breeds drug use and crime, those realities cannot be disputed and when will Mayor Garcetti and Councilman Bonin awake from this public policy slumber and construct a plan that saves one of the great public venues in all of California?

The author is a member of the Oceanfront Committee of the Venice Neighborhood Council. He can be reached via email at nantoni@mindspring.com